Unfortunately there is no photograph or likeness of, nor is there any great deal of historical information to be had about Abel Pifre.

He was a French engineer who got his start in solar energy engineering by working as an assistant / consultant with Augustin Mouchot the guy that developed the first solar engine.

Later on Abel Pifre went on to build several improved solar engines of his own, including a solar driven printing press, for which perhaps he is most remembered. 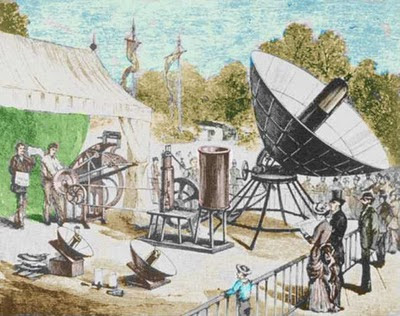 Abel Pifre first demonstrated his solar press to the Union Francaise de la Jeunesse at the Jardin des Tuileries Paris on the 6th of August 1882.

His machine had a concave solar mirror of 3.5 metres, roughly 11.50 feet, in diameter which focused the sun onto a cylindrical steam boiler. This produced steam which powered a 2.5 horsepower vertical engine, and this in turn powered a Marioni type printing-press.

It was reported that the press operated continuously from 1.00 pm to 5.30 pm even under semi-overcast conditions, to produce some 500 copies per hour of a journal, "Le Journal du Soleil", which was published specifically for the event.

An Extract from Popular Science 1881

The following extract from Popular Science 1881 gives us a rare glimpse of Pifre’s work just prior to the exhibition of the solar printing press at the Jardin des Tuileries.

"Several experimenters have contrived machines for the purpose of utilizing the solar heat as a source of mechanical energy, among whom Ericsson and Mouchot have been most successful."

"M. Pifre describes in a recent number of the "Comptes Eendus " some results from a machine of Mouchot's construction, claiming to have utilized more than eighty per cent, of the heat which falls on the mirrors of the instrument : something over twelve calories to a square metre. "

"We do not mean, of course, that this percentage of the total solar energy appeared as mechanical power in the engine, but only in its boiler. The machine had a mirror surface of nearly one hundred square feet, and gave not quite a horse-power. It is very possible that such machines will find useful application in the rainless I'cgions like Egypt and Peru."

"The apparatus invented by Mouchat for utilizing the direct rays of the sun as a source of power has been so improved by M. Pifre, a French engineer, that he claims to be able to make available eighty percent, of the received heat of the sun." 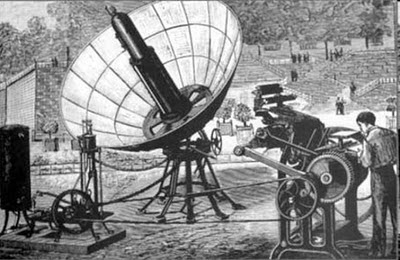 "M. Abel Pifre has succeeded, by changing the form of the reflectors and the heaters, in considerably increasing the efficiency of the solar engines invented by M. Mouchot. While M. Mouchot has not been able to utilize more than fifty per cent, of the heat of the sun, M. Pifre with his improved apparatus makes eighty per cent, available for use. With a receiver of 9-25 square metres and a clear sky he boils fifty litres of water in less than forty minutes, and obtains an additional pressure of one atmosphere every seven or eight minutes."

Hello! I'm research about the first solar still plant (1872) and I knew about Prife's engine. Do you have some more information about Pifre? Thanks indeed in advance. Best, Nelson from Chile, south America.